Fishermen caught in the poverty trap,
Porpoises stuck in the middle. 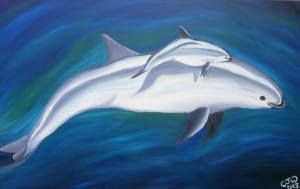 Sea of Cortez,
Gill nets unfurled.
What a killer.
Lost to this world,
Like so much fishnet
Stocking filler,
One more vaquita
Vacates the Vermilion.

Action stations
For our rarest cetaceans.
No more accidental death,
Time to start saving, not drowning.
Don’t hold your breath.

One of seven true porpoise species, the vaquita is the world’s smallest and most endangered cetacean. It has striking facial markings reminiscent of dark eyeliner and black lipstick, as though it were wearing ‘goth’ make-up. This rare and elusive species was only discovered in 1958. Its one remaining population, believed to comprise fewer than 100 individuals, is confined to a tiny area in the extreme north of Mexico’s Gulf of California. Vaquitas were never abundant, but in recent decades numbers have plummeted as more and more porpoises drown after being trapped in the virtually invisible gill nets set to catch fish and shrimp. More info

We should all blow our top
If they don’t stop hunting
The diminutive zacaton-munching
Zacatuche or teporingo
Endemic to the transverse neovolcanic belt of
Popocatepetl, Iztaccihuatl, El Pelado and Tlaloc.
But that’s easy for me to say.

Named after the remote offshore Mexican island where it used to live, the Socorro dove became extinct in the wild in the 1970s . Having evolved on an island with no natural predators, this tame, confiding, ground-feeding dove was extremely vulnerable to the invasive rats and domestic cats that had been accidentally or deliberately introduced to Socorro by humans. Overgrazing by feral sheep and goats and foliage damage caused by locust infestations also destroyed much of the native forest vegetation on which the dove depended for survival. A worldwide captive breeding programme has saved the Socorro dove from extinction, but it cannot be reintroduced to the island until the non-native species have been removed or eradicated and the native vegetation restored.

Spill the beans, amphibian Pedro Pan,
Can you resolve the mystery
Of your preternatural history?
Prince of perpetual adolescence;
Unfathomable underwater thwarter
Of senescence.
Does the essence
Of eternal youth
Come in a bottle
Labelled ‘axolotl’.
Gospel truth
Or propaganda,
Señor salamander?

The bizarre-looking axolotl, which was worshipped by the Aztecs as the physical embodiment of Xolotl, god of lightning and death, is native to the ancient system of deep-water channels and lakes around which Mexico’s capital has expanded. Axolotls are renowned for retaining juvenile characteristics into adulthood, a phenomenon known as neoteny. Unlike most other amphibians, axolotls lead entirely aquatic lives. They reproduce while still in the larval form, and never lose their external gills. Their ability to regrow limbs and organs has recently attracted a great deal of attention from the scientific community. Extinction in the wild is a very real possibility unless the last remaining water bodies to which axolotls are confined can be safeguarded against the deleterious effects of urban expansion. More info

and the word was…

© Tim Knight and timknightwriter, 2014. Unauthorized use and/or duplication of text and/or photos without express and written permission from this blog’s author and owner is strictly prohibited. Excerpts and links may be used, provided that full and clear credit is given to Tim Knight and timknightwriter with appropriate and specific direction to the original content.